The residents of Montgomery have pulled ahead in the ongoing match between people who care about this city, and Mike Watson. After the roof collapsed earlier this week on a building on Cloverdale’s beloved Fairview strip, a condemnation notice went up to announce Watson’s neglect. The notice answers Cloverdale’s question of whether the city would follow through on their public letter posted earlier this year, notifying Watson of the sixty days he was given to either fix the buildings or face serious legal action. COVID-19-related restrictions threw a wrench in things, as the sixty-day mark came and went and it wasn’t clear whether the city would remain true to their word.

The notice posted earlier this year, giving Watson a 60-day grace period to address critical repairs needed on the building.

And then the roof fell in, and the city lept into action and condemned the spot immediately. Good job, city officials!

It is unclear whether the buildings will be torn down and the property passed into someone else’s hands. 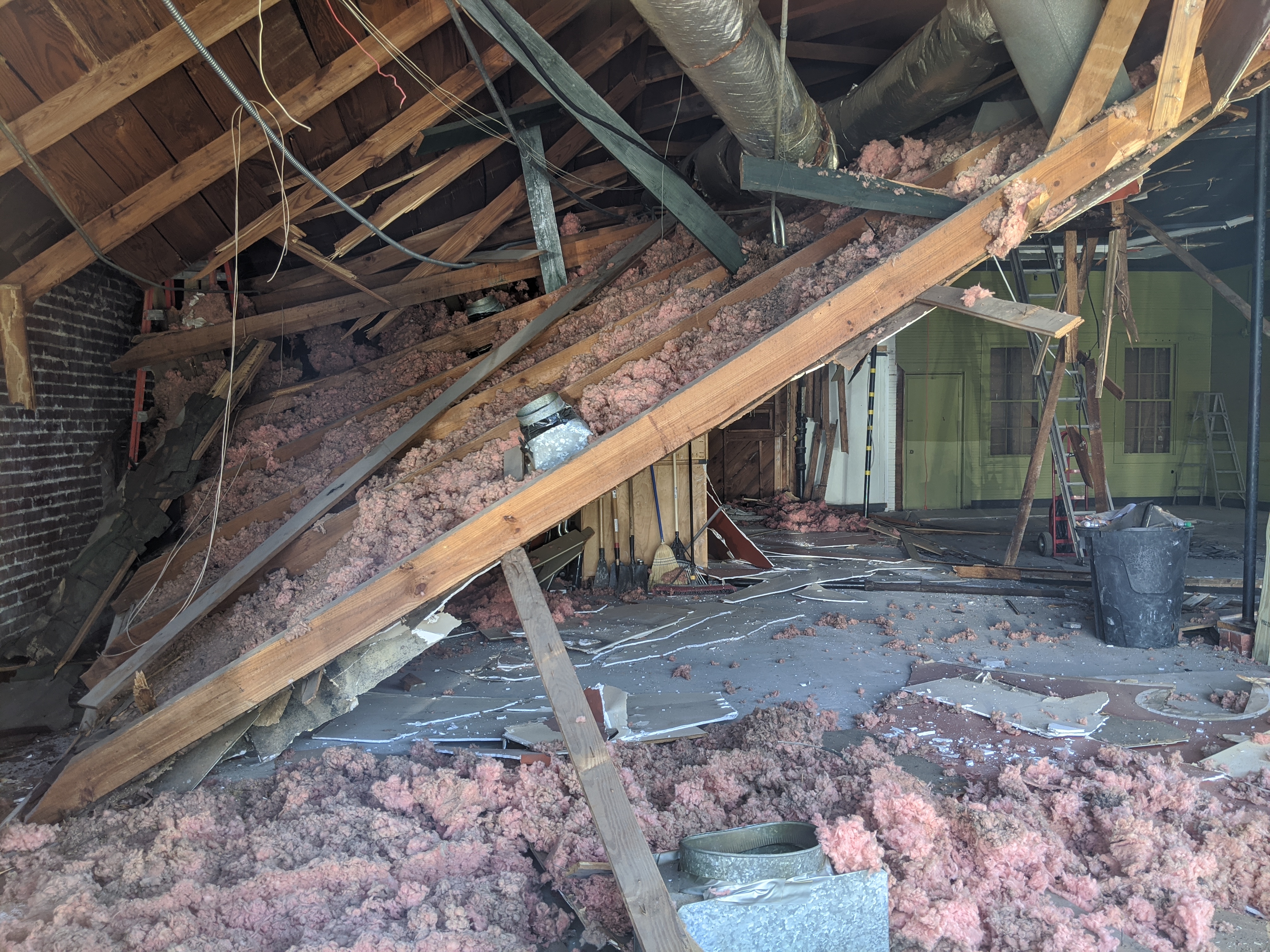 The old Tomatino’s and Cafe Louisa location has just been condemned due to the collapsed roof.

The city’s action comes as a surprise, considering some past tendencies to favor Watson. The Sand Bar, for example, keeps getting a renewed lease, despite Watson’s rare decision to open it. Have you ever wondered why it’s always closed? Last I heard, the lease still doesn’t include a set monthly rent, but instead charges a percentage of sales to cover the cost of the space. How Watson secured this deal is beyond me, but I’d sure love a sweetheart deal like that with my landlord. Without incentive to stay open, why should he run a business that people can enjoy?

His downtown operations, which clearly receive more of his love than his property on Fairview, cater primarily to an air force crowd as well as those who don’t know any better. He has had either an unfortunately long string of staff who don’t care to ID their patrons before serving them alcohol, or he just doesn’t care who he serves, because his downtown bars have been regularly fined for serving minors.

His tendency to serve minors, multiple times, across multiple businesses, came back to haunt him when he applied for a new liquor license six years ago for an Irish pub destined for the Cloverdale strip. The city refused to grant it to him due to his track record. That year alone, Watson was cited twice for serving underage minors, and a third charge was dropped after the agent who cited him stopped working for the ABC board (more on that in this Advertiser article).

What would have happened to the roof of that building if he had been given the chance to open his spot where he could serve Huntingdon freshmen? Of course, there’s also the fun rumor that Doug Gurney, owner of 1048 Jazz and Blues next door, opened a church adjacent to Watson’s location that would have prevented Watson from opening due to its distance from a house of worship (more on that here).

The seriousness of Watson’s lousy ownership can’t be overstated. People loath that these buildings are in his hands. Is something preventing him from moving forward with construction? Perhaps he should provide our newspapers with a comment other than “a rooftop bar is coming to Cloverdale.” Now that the roof is on the ground, I guess he can open? 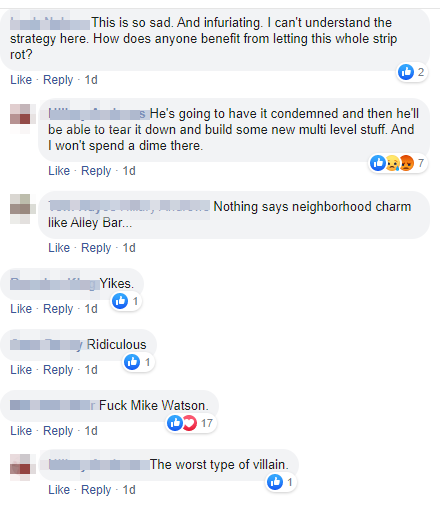 Facebook users have expressed their fury over Watson’s continued harm done to this city.

Also downtown is Commerce Beerworks, another business owned by Watson. The “Beerworks” part of the name, of course, is a generous and misleading description for a place who never uses even half of their beer taps and whose selection rivals only that of Twin Peaks over in EastChase. It’s unclear whether the taps don’t work or if the bar doesn’t care to expand their selection.

It’s a strange feeling to find joy in the collapsed roof of a favorite building, but if it ultimately leads to Cloverdale finally being rid of a man who doesn’t care about the space the way the neighborhood’s residents do, then so be it. I’ve said it before and I’ll say it again: Montgomery deserves better than this.

Watson is harming the value of this city, and I’m glad our leaders are starting to realize that. While the future of the Fairview strip remains unclear, I hope our leaders continue to keep the interest of Montgomery’s residents in mind while they handle future business dealings with Mike Watson.

For other Marauder thoughts on this topic, read Why is Cloverdale Being Held Hostage?